A copyright small claims court is an idea whose time has come.

The problem with the current system of copyright enforcement in the United States is that it's too expensive and complex. Estimates are that it costs an average of ~$350,000 to prosecute a federal lawsuit to enforce copyrights. I have been involved in cases that have taken as long as seven years to resolve and cost my clients anywhere from $250,000 to $800,000. Most creative professionals simply can't afford to protect their rights. The game is for the big players only.

On October 22, 2019, the CASE Act  (H.R. 2426) passed in the House by a vote of 410-6. The bill was received in the Senate for action the next day. The language of the bill has changed since this post was originally written but its essence remains untouched. Here is the version of the bill that was sent to Senate.

The way it stands now, visual artists, authors, songwriters, bloggers, vloggers, and small businesses have rights in their creative properties, but no meaningful remedies when their work is taken. Certain members of Congress, working with key stakeholders, are trying to fix that problem.

On September 27, 2018, the House Judiciary Committee held a hearing on the Copyright Alternative in Small-Claims Enforcement (CASE) Act HR 3945. The CASE Act is an attempt to create a simple and inexpensive process that will allow creative professionals to bring claims of infringement or seek declarations of non-infringement.

The  idea of the current draft is that there would be a small claims tribunal called the Copyright Claims Board operating out of the Copyright Office. Three Officers would hear the claims. Attorneys would be optional; claimants could bring and argue their cases themselves. Hearings would be conducted electronically with no need to appear in person. So, no travel costs.

Using the Copyright Claims Board to resolve an issue is completely optional. A copyright holder does not need to file a claim there and the respondent (the person against whom the claim is filed) can opt out of the process.

Damages are limited. Statutory damages per work infringed cannot exceed $15,000, total damages cannot exceed $30,000. Filing an application for copyright registration is required before a claim can be brought. A claimant is limited to filing up to 10 cases per year, referred to as the "cap."

I am by no means an expert on the legislative process but before September 27th, the CASE Act had stalled in Congress. Other pieces of legislation impacting intellectual property rights, specifically addressing the rights of musicians, took priority. Individuals and organizations who have worked on the CASE Act continued pressing to have the bill moved forward.

In August, I went to Washington with one of my clients to meet with Joe Keeley, Chief Counsel of the Subcommittee on Courts, Intellectual Property, and the Internet of the House Judiciary Committee. Our goal was to express our support for the bill and push for a hearing.

My client, Elizabeth Putsche, has been involved in litigation over ownership of a body of work consisting of 15,000 photographs for nearly four years in four different courts, both state and federal in two different states. Her ordeal has turned her into a copyright reform activist. Her persistence, as well as the hard work of many others, resulted in a hearing being scheduled just a month after our visit. 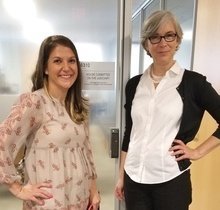 The CASE Act: the Hearing

These are the witnesses you will see in the clip below (links are to their written testimony):

I distilled eight minutes of what I consider to be highlights from the 90-minute hearing:

If you are interested in watching the full hearing, the video used to be here but they've taken it down.

Copyright Small Claims Board and Fair Use

Out of all the issues discussed in the hearing, the one I found most compelling was raised by Representative Zoe Lofgren (D-CA). She wants to be sure that the doctrine of fair use is properly implemented by the proposed Copyright Claims Board. It's a valid concern. How can the defense of fair use be equitably applied by a Copyright Claims Board if there is no meaningful appeal or oversight?

Turning the Copyright Small Claims Bill into a Law

The hearing ended with a request from Chairman Bob Goodlatte (R-VA) that all participants consider and present language that would address the issues raised at the hearing.

This bill, although it is bi-partisan in the House, does not have a counterpart in the Senate. The Senate Judiciary Committee has been distracted by other matters. Sponsors in the Senate are needed. I suspect that grassroots efforts to recruit one or more sponsors are underway. It wouldn't surprise me if the Senate sponsor came from a smaller state, they tend to be more responsive. If you know one, you could help out here.

It's just a matter of time before the CASE Act becomes law. When it does, you will need to have copyright registrations on your work to enforce your rights. File them now. You'll need them later.

Activism works. Speak up for your rights and not only will you be able to keep them, you will be able to enforce them.